Press enter to begin your search

Most doctors recommend starting solids at around 6 months. Before then, the baby would have received all the nutrients required from breastfeeding or formula. You should never give solids to a baby younger than four months because their digestive system is not ready for solids yet. 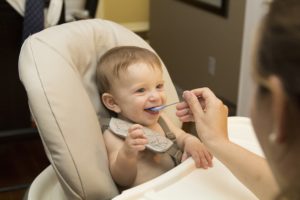 Image by yalehealth from Pixabay

The signs that your baby is ready to try solids

A baby is ready for solids when:

The best place to start is baby cereals and single ingredient pureed food. Your doctor may suggest which is specifically better for your child. If your child is breastfeeding stores of iron start depleting at around 6 months so your doctor will probably ask you to include the following beef, chicken, and turkey helps to replace the irons. Additional first pureed foods may include sweet potatoes, bananas, and pears.

How do I start?

In order to increase the chances of success using the following tactics when beginning solids:

How much should my baby eat?

Begin with solids just once a day. After one or two months depending on the baby’s requests step up to two meals a day. Step this up again two months later to 3 meals a day.

At around 8 to 9 months, the baby will probably be eating solid food three times a day. A typical baby diet at 8 months might include:

What do I watch out for? What are the risks?

When adding solids to your baby’s diet it’s very important to watch out for the following: